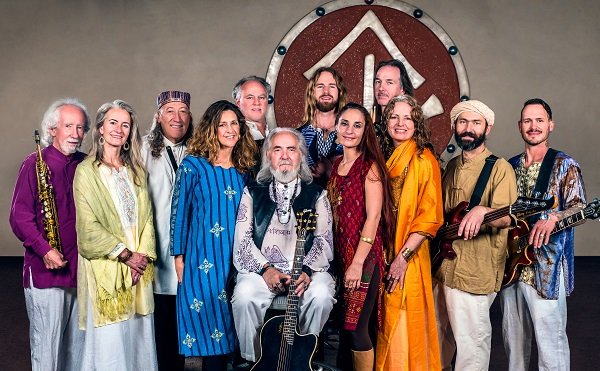 To accommodate a larger audience, the concert is being moved to an outdoor venue as the Sea Of Glass tickets are sold out.

A CosmoPop® concert with TaliasVan & The Bright & Morning Star Band.  The concert is a celebration of the release of their new CosmoCountry album, "Im Still Trying To Move On" and the show will feature songs from the album, as well as other CosmoPop genres. This 12-piece ensemble from around the world performs the interdimensional, timeless music of TaliasVan – visionary maestro, singer and creator of CosmoPop, his unique style incorporating various musical genres with chant and mantra to create CosmoJazz, CosmoRock, CosmoCountry, CosmoCeltic, CosmoMystic, CosmoMidZone, and more

TaliasVan & The Bright & Morning Star Band have produced four full-length CDs, two 3-song sampler CDs, and a live concert DVD that won an Aurora Award for Best Live Concert Video, sharing honors with Disney and Fox Media. The band is featured on KVAN Radio around the world (kvan.fm) and TaliasVan has performed his Spiritualution Concerts outdoors throughout the Southwestern U.S., including Mt. Shasta, California, as opposed to more intimate indoor CosmoPop concerts. His most recent Spiritualution Concert was at Camp Avalon in Sedona, Arizona on May 5, 2018.

Music has been TaliasVan’s passion since the age of 6 when he started singing with street corner harmony groups in Pittsburgh.  He recorded and performed with various professional groups and in nightclubs throughout the 60’s until 1970 when he had a spiritual awakening and devoted his musical talents to serving humanity.  In the 1970s he was led to Tucson’s 4th Avenue and started Son Light Ministries at 630 N. 4th Avenue, where he took in and cared for the homeless and disenfranchised.  During that time, he performed as an opening artist for several famous Christian contemporary rock bands, such as Petra, Resurrection Band, and Servant at the University of Arizona. Realizing his music did not fit the contemporary Christian category, TaliasVan pioneered “New Age Vocal” in Hollywood and was the first to put lyrics to New Age style music in the ’80s with his vinyl Unicorn Love album.

As he continued to grow and expand in his activism and social, spiritual, and environmental consciousness, TaliasVan was led to Sedona where he developed and cultivated CosmoPop.  Set against a background of eclectic melodies, CosmoPop’s lyrics address the suffering of our times and the human condition, while giving hope for a better world to come.  The beating heart of CosmoPop is TaliasVan's voice and guitar.  His stylized vocals express the height and depth of emotional experience, while his lyrics reveal the poetry and wisdom of one who has lived lifetimes.  His soul-prose expresses a spiritual sound that is visionary and hip, yet real and down to earth.  TaliasVan & The Bright & Morning Star Band balance the intimacy and spiritual sincerity of a singer-songwriter with the groove and excitement of a 12-piece intergalactic jam-band.

Proceeds benefit scholarships for the University of Ascension Science and The Physics of Rebellion and internships for Avalon Organic Gardens & EcoVillage.

To those in financial need who want to see the show, please call 520-603-9932 to make an appointment to reciprocate in advance of the show at Hands In The Soil for 3 hours at Avalon Organic Gardens & EcoVillage in Tumacacori.  Shuttle available if needed.  No arrangements will be made at the door.